Connection Between B12 Deficiency and Gluten Sensitivity?

B12 Deficiency and gluten sensitivity (GS) are generally considered to be unrelated, except in cases of diagnosed celiac disease (CD). Taking a look at new findings on GS and connecting the dots challenges this assumption. Examining the issue in depth leads us to consider the possibility that vitamin b12 deficiency may be a factor for some GS sufferers as well.

The Numbers On GS May Be higher

First off the numbers on the percentage of the general population suffering from GS may well be higher than originally thought. Estimates are largely speculative and controversial, varying greatly from as little as 1% to as high as 30%.(1)

That’s a huge difference, largely because of the lack of formal research that has gone into exploring this topic. It’s worth looking at this information in the context that:

Gluten Sensitivity – A Condition On The Fringe

In many regions of the world disorders involving gluten are not recognized as a priority at the public health administration level.(2) (3) Even here in our developed first world western context there is very little peer reviewed research done on gluten sensitivity even though it is a patient reported problem for a significant percentage of the population. Whatever the final number ends up being it’s likely a larger issue than most people realize. This is probably because gluten sensitivity is not yet regarded as a medical condition in many areas and consequently is under the radar of many health officials. One prominent researcher on the topic Dr. Alessio Fassano, Chief of Pediatric Gastroenterology and Nutrition at Massachusetts General Hospital, has been at the forefront of putting GS on the map as a recognized medical condition. His work states that the evidence for GS as health issue separate from CD is definitive and rising in prevalence. By his own admission much more research is required to properly understand the condition and it’s implication for public health. (4)

Where research is being done the numbers on patient reported gluten intolerance deviate on the upside from the commonly accepted lower end of the range of under 1%.

Some Data On Current Research In Western Nations:

Enter metabonomics, the scientific exploration and analysis of the chemical signatures of cellular metabolism.(7)

Research on metabonomics shows us that some patients reporting GS have metabolic profiles comparable to diagnosed celiacs, with a number of subjects showing injury to the small intestine. As we already know it’s damage to the small intestine ( vis a vis an immunological response to gluten) which can cause absorption issues and consequently chronic nutrient deficiencies.(8)

This biologically based evidence is increasing speculation that many who report being gluten sensitive are potentially early celiac. Prior to this finding the term early celiac didn’t exist. While early celiac is not regarded as a condition, it is now on the radar – a positive development for sufferers who may not be having their concerns addressed by the health system.(1)

If evidence continues to build that a statistically relevant number of GS sufferers are in fact experiencing early CD then it will indeed be a cause for concern. Untreated Celiac disease is a significant health risk. A 2009 study of US Air Force personnel found that individuals with undiagnosed CD had four times the mortality rate than those without the disease. What percentage of these people might have displayed early stage signs of the disease and what relevance this would have had to extending longevity is of course unknown but it’s thought provoking nonetheless.(9)

The takeaway from all this is that if some early celiac sufferers are presenting signs of intestinal harm then it is likely nutrient absorption will become an issue if the condition progresses to celiac disease. For instance, vitamin B12 deficiency is recognized as a factor in celiac disease. One Swiss study found that:

As outlined above the medical communities understanding of gluten sensitivity is continuing to develop. It’s possible that the number of potential celiac sufferers is underestimated, due to a lack of awareness and data on the existence of early stage CD. If this is in fact the case then it’s possible that a number of those experiencing gluten sensitivity are actually celiac. Providing that this hypothesis proves out with further research, many of these individuals are potentially at risk of becoming vitamin B12 deficient. The established research to date firmly supports the assertion that those with CD are susceptible to being vitamin B12 deficient.

In case this is new territory for you, the following are symptoms of gluten sensitivity:

As with many conditions stemming from immunological responses, symptoms may be broad and varied. Symptoms may also manifest in a highly individual manner.(12)

What To Do If You Suspect You Have Gluten Sensitivity

If you feel that severe gluten sensitivity, and by extension vitamin B12 deficiency, is potentially an issue for you then there is plenty you can do about it. Radically adjusting your diet or rushing out to dose yourself up on nutrients is probably not the best call at the beginning. Instead

Once you have all the facts relating to gluten sensitivity and vitamin B12 deficiency you can make an informed decision on how best to proceed. The good news is that early screening for nutrient deficiencies generally can not only tell us what supplements we may need,  but what the underlying causes are. 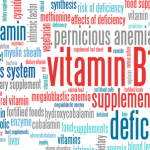 Vitamin B12: Why Your Body Needs It and the Risks of B12 Deficiency - Getting your daily recommended dose of vitamins isn t always easy, but this can be especially true when it comes to vitamin b12.